Is A Hand Written Agreement Legal?

Handwriting agreements can feel unprofessional or "not good enough". But what does the law say? We're explaining this in a no-bs manner. (3-min read) 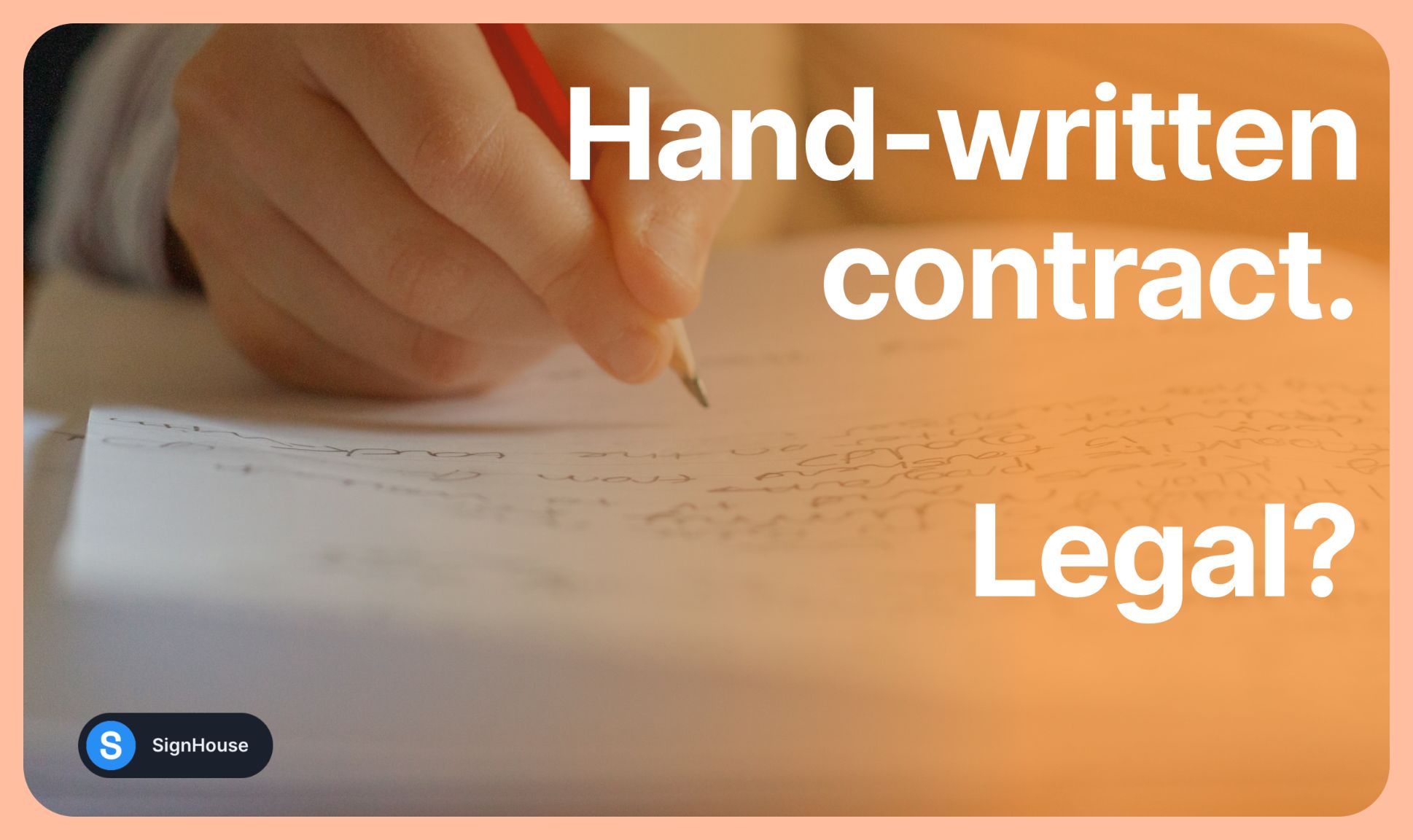 Published on
October 18, 2022
eSign documents the 10x easier way
Find out why thousands of people are moving to SignHouse for their digital signatures! (100% free)

Let’s say you’re in this situation.

You might have to interact with a handwritten contract.

Then you start asking yourself: is it legal?

Does it hold any weight in court, if it ever gets there?

Should you cross your fingers and hope it never gets to that point?

No need for that.

We’ve talked to hundreds of lawyers to simplify this for you.

Is a hand-written contract legally binding?

There are 4 conditions for a contract to be legally binding.

Let’s have a look at them:

As long as these 4 conditions are met, a contract is legally binding.

Can those conditions apply to a handwritten contract? The answer is: absolutely yes. They can be, but they have their shortfalls. However, it’s possible to have a hand-written contract that’s as valid as any other contract.

After talking to hundreds of lawyers, we’ve understood that:

So where does the confusion come from?

But the law is the law.

Should you go for a hand-written legal contract?

The short answer is: if you’re able to, avoid it.

After walking you through the misconception, now we’re “switching sides”.

Here is why you shouldn’t go for a hand-written legal contract:

The alternatives imply one of the two.

Number one, either a contract that’s been typed — through a typewriter, or digitally-typed and then printed.

Number two, the best option: using an eSignature software, such as SignHouse.

It’s not so much that the signature is electronic (although that helps as well), but it mostly has to do with the major benefits of using an electronic signature software.

Notably, the most important benefit: the electronic signature software will store the documents, as well as identifiable details from each signee, onto their servers. Ultimately, a 3rd party that is trusted by millions of people and governments, acts as an authority when it comes to the validity of documents.

Can any contract be hand-written?

The Statute of Frauds mentions that certain contracts need to be written in order for them to be legally-binding.

As an implication, the following contracts do not hold weight if they’re hand-written.

Regardless, the Statute of Frauds doesn’t mention whether they need to be digitally typed or eSigned.

How to make a handwritten contract legal

Let’s have a look at them:

Making a handwritten contract legal would assume you going through the following steps:

Will a handwritten agreement hold up in court?

As long as the 4 conditions needed for a contract or agreement to be considered valid are met, then yes, a handwritten agreement will hold up in court!

Handwritten agreements are 100% enforceable, with the slight exception of what the Statute of Frauds mentions needs to be in writing:

Those handwritten agreements will not hold up in court, but they are the exception.

The short answer is: It could be legal, as long as the following conditions are met:

Those 4 conditions are needed for any contract to be enforceable in a court of Law, regardless of whether it has been handwritten or typed.

That said, you might not want to go forward with a hand-written custody legal agreement.

Don’t get us wrong: a hand-written custody agreement is 100% legal and enforceable in a court of law.

We simply recommend going for the better option, if it’s possible.

But if the situation does not allow it, then a hand-written custody agreement will work just as fine (as long as the conditions listed above are met).

Do signed agreements hold up in court?

Yes, signed agreements hold up in court, but they first need to be valid (before being signed). As long the agreements meet the following 4 conditions, they are valid:

A signature added to an agreement is, to put it shortly, the confirmation that you agree with the clauses and conditions.

However, the 4 conditions listed above need to be met in order for the contract/agreement to be enforceable in a court of law.

When the 4 conditions are met + your signature is added, it holds up in court!

How legally binding is a written agreement?

If an agreement is handwritten, it can still be 100% legal and enforceable by a court of law — with small exceptions.

A contract, regardless of whether it's handwritten or not, needs to tick the the following boxes: A) Mutually agreed by both parties, B) Have legal validity, C) Capacity, D) Consideration.

Regarding exceptions: due to the Statute of Frauds, certain contracts need to be written in order for them to be legally-binding:

What makes a contract null and void?

A plethora of things can make a contract null and void:

How soon after signing an agreement is it legally binding?

As soon as an agreement has been signed by all parties, in conditions that are fully legal, it starts being enforceable.

NOTE: This only applies if a contract doesn't have an effective date.

Most contracts, however, have an effective date. In other words: a date from which the contract starts being put into action.

Are your electronic signatures legal?

Signing papers digitally started being equal to physical, handwritten signatures in the U.S. eSignature Act of 2000 (U.S. Federal Act) + the Uniform Electronic Transaction Act (UETA). As a consequence, laws in other countries have followed suit. SignHouse is built around these laws.

Everybody starts on a free plan, and you can stick to it forever. It costs you nothing to try SignHouse!
Get started for FREE
Try it for free
No credit card needed
Unlimited free version